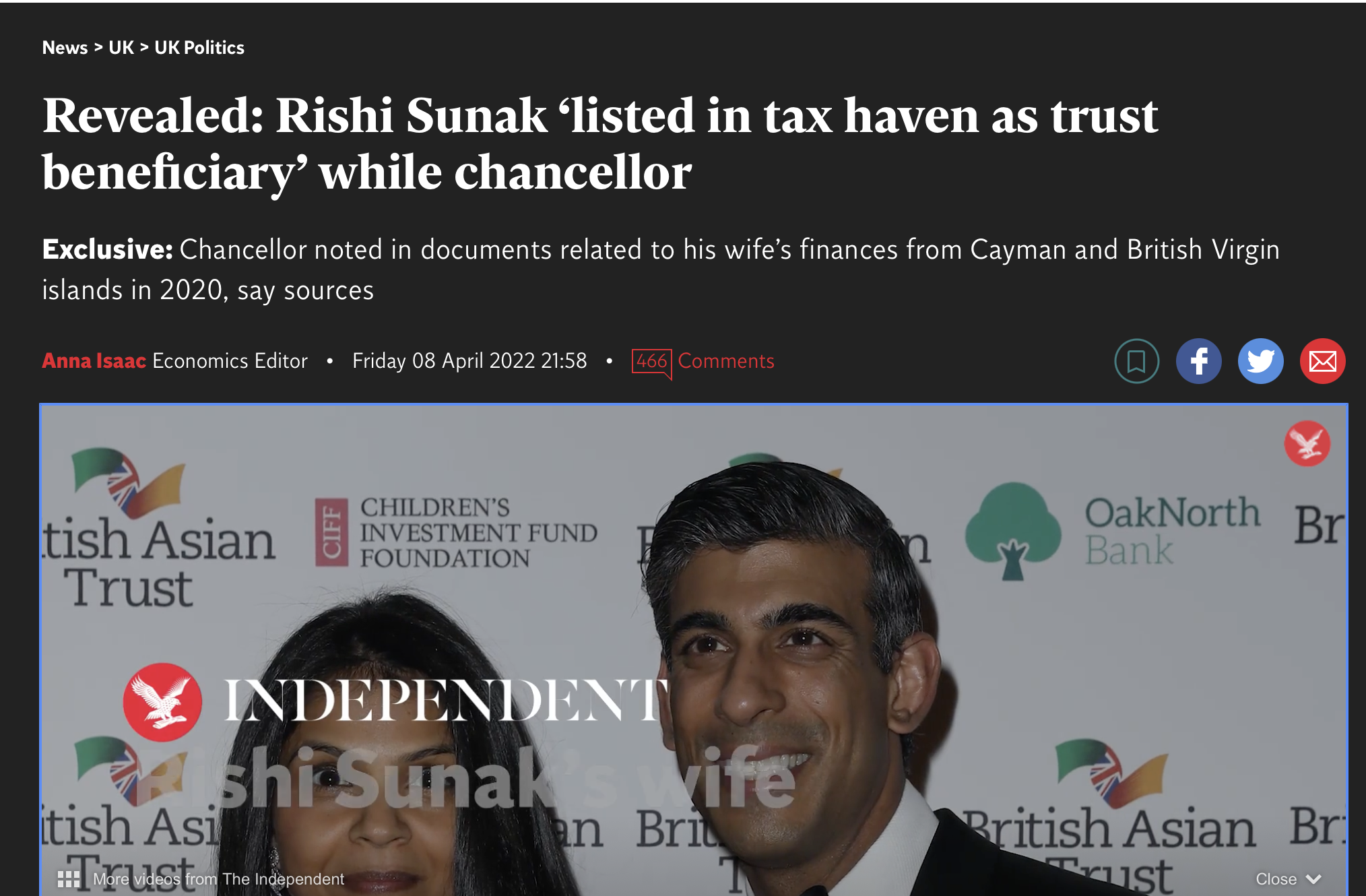 Are the Sunaks using an offshore trust to avoid £m in UK tax?

I’m writing a short series of posts on the Tory candidates and tax. Today: the Sunaks. A recap of what we know, what we don’t, and the two big outstanding questions.

The following has been overtaken by Sunak’s recent denial to Andrew Marr that he’s used tax haven trusts. My assumption is that this denial is correct, and the Independent report was wrong. I’m keeping the rest of this post up because I think the point is of general interest. Right now there is no reason to believe the Sunaks are using an offshore trust to avoid tax.

The following is speculation based upon information on the public domain, my experience as a tax lawyer for many years, and conversations with other tax experts. I could be wrong – and if the Sunaks confirm that their tax position is actually completely straightforward, I’ll happily post a correction and delete my Twitter thread.

What we know about the Sunaks

After some initial resistance, the Sunaks eventually admitted that Akshata Murty is a non-dom, and that she had historically claimed the “remittance basis”. Which means she wasn’t taxed on her considerable overseas income – primarily several $million a year from Infosys, the Indian IT company started by her father.

After a considerable kerfuffle, Mrs Murty eventually agreed to stop claiming the remittance basis. Does that mean the Sunaks now pay UK income tax on the $m in Infosys dividends? Not necessarily.

The key piece of the puzzle: The Independent reported back in April that both Akshata Murty and Rishi Sunak were beneficiaries of offshore trusts in the British Virgin Islands and the Cayman Islands. This was never denied – the Sunaks refused to comment.

What we know about wealthy non-doms

Non-doms aren’t taxed on their foreign income and gains (my previous post explains this in more detail). That’s very generous of the UK, and very lovely for them. But, like all good things, it comes to an end. Either the non-dom becomes so attached to the UK that they can no longer credibly claim to be a non-dom. Or, after fifteen years, they become “deemed domiciled” in the UK by operation of law.

But what if you really, really, don’t want to lose the lovely ability to rack up foreign income and gains tax-free? Easy: set up an offshore trust before you lose your non-dom status. The trust then effectively preserves the tax-free nature of the assets in the trust forever1. Of course it’s a load more complicated than this, but I think that’s the essential truth. This kind of arrangement is called an “excluded property trust” and is absolutely standard planning for wealthy non-doms – and you can see just how standard it is if you Google “excluded property trust”.

So it would be extremely unsurprising if Mrs Murty set up an excluded property trust.

What we don’t know – but can speculate

Let’s speculate that one of the trusts disclosed by the Independent is an excluded property trust holding Mrs Sunak’s Infosys shares. This could be completely wrong – in which case the Sunaks should say so, and I’ll correct this post.

But if that’s right, when Mrs Murty said she would now be taxed on her overseas income, she was being exceedingly cute. The reality would be that the dividend income is received by their offshore trust, and so isn’t Mrs Murty’s income at all. The Sunaks would then be avoiding several £m of UK tax on the dividends, and – if the trust sells the shares in the future – there’s no capital gains tax on the sale.

Whether or not Mrs Sunak is claiming the remittance basis would then be a red herring. Her non-dom status enabled her to set up the trust and put the shares in it (in a way a normal UK resident couldn’t). But the trust income/gains remain untaxed2Payments by the trust to the Sunaks in the UK would be taxable (although loans can be used to get around that)..

Why we shouldn’t forget inheritance tax

Most of the press coverage around the Sunaks and tax focussed on income tax – and if the above speculation is right, the Sunaks are avoiding several £m of income tax each year on the Infosys dividends. But inheritance tax is much much more important – with holdings of close to a billion dollars, the Sunaks’ estate would face inheritance tax of several hundred million pounds if the Sunaks held their assets directly. An excluded property trust would avoid that tax.

There are really just two:

Is this tax avoidance, and does that matter?

Whether something is or is not tax avoidance is a subjective question. But my view is: being a non-dom and claiming the remittance basis is not tax avoidance – it’s how the rules are supposed to work (stupid as that may be). It does, however, feel inappropriate for the family of a Minister.

But using offshore trusts to artificially extend the benefits of non-dom status is in my view clearly tax avoidance. And for a Chancellor or Prime Minister, it creates an impossible conflict of interest – it’s the job of Government to close tax loopholes, not secretly benefit from them

David Cameron was criticised for inheriting £30,000 from his father that had been in an offshore unit trust. I thought that was unfair – a unit trust is not very avoidance, and you can hardly blame Cameron for what he inherited. In any case, Cameron later confirmed he and his family did not benefit from offshore trusts.

By contrast, Sunak is asking to be Prime Minister whilst refusing to comment on whether he is a secret beneficiary of an offshore trust which conceivably avoids £100m of tax. He should clarify the position.

I am speculating based upon information on the public domain. If the Sunaks confirm they don’t have valuable assets in an offshore trust, and are actually paying income tax on the Infosys shares and other foreign income, I’ll correct this post and delete my Twitter thread.

2 thoughts on “Are the Sunaks using an offshore trust to avoid £m in UK tax?”