The Chancellor of the Exchequer, Nadhim Zahawi, has been sending threatening letters, drafted by expensive lawyers, to people investigating his tax affairs. The letters are designed to intimidate, and say they are confidential and can’t be published. One was sent to me. I am publishing it.

Update: The Times has the story here. For those who prefer PDFs, I’ve uploaded the first Zahawi letter here, my response here, and the second here.

The public have a right to know if the Chancellor of the Exchequer – the person responsible for HMRC and tax – created a tax avoidance scheme to avoid £4m of his personal tax. At this moment I expect HMRC is considering whether to launch an investigation… it’s hard to imagine a worse conflict of interest than the Chancellor being investigated by tax inspectors whose conduct he can influence.

And the public definitely have a right to know if the Chancellor sends letters to prevent the media and others from writing about his tax avoidance.

I believe in transparency. I think it’s improper for lawyers acting in the shadows to curtail legitimate public debate about important public figures, particularly when there are allegations they’ve been dishonest. So I told the Chancellor’s lawyers I’d only accept open correspondence. They persisted in sending me letters that claim to be confidential. They aren’t. They contain no confidential information, and I never accepted a duty of confidence – indeed I explicitly rejected it. I don’t believe the Chancellor ever really intended to pursue a claim. The public interest is so obvious, and so strong, any libel claim would be farcical.

The letter they sent me says, rather artfully, that it’s not actually a threat to sue for libel. But it comes from a libel lawyer, and tries to prevent me publishing it. Similar letters have been sent to others in recent weeks, and I understand Zahawi has done this before – using lawyers to silence people writing about his tax affairs.

I’ve considered very carefully whether I should publish the correspondence. I’ve considered the matter with others and spoken to several legal ethics experts. All support my view that in the circumstances of this case there is no legal or ethical reason not to publish the letters, and a powerful public interest in publishing. So that is what I’m doing. And I will be writing to the Solicitors Regulatory Authority to ask them to make clear that lawyers should never assert that letters of this kind are confidential unless there is a proper and reasoned basis for such an assertion (which is is clearly absent here). More here on why I am confident this is both lawful and proper.

For the last couple of weeks, I’ve been writing about how, when Nadhim Zahawi co-founded YouGov, his 42.5% founder shareholding ended up with a Gibraltar company, Balshore, owned by a secret offshore trust controlled by his parents. I said it looked like tax avoidance. I am a tax expert. And every other tax expert I’ve spoken to agrees – accountants, solicitors, QCs, and retired HMRC inspectors.

Zahawi provided an explanation for this: that his father had provided “startup capital”. But he hadn’t. He may have provided £7k for some of the 42.5% but (according to documents filed by YouGov) another investor paid £285,000 for 15% of the shares at the same time. Clearly £7k didn’t justify 42.5%. I published my conclusion – there were three possibilities: I’d made a mistake; YouGov had filed a series of wrong documents; or Zahawi was lying. I invited Zahawi to respond. He didn’t – instead he switched to a new explanation – that his father had provided so much assistance, and Zahawi was so inexperienced, that it was only fair for YouGov to give his company (Balshore) the shares.

I couldn’t understand why he provided that first explanation, and then dumped it and alighted on a new one (itself not very credible). I couldn’t think of any explanation except deliberate deception – so I called it what I thought it was: a lie. It’s this that has Zahawi so unhappy. The latest defence piles on more of what look like falsehoods. They suggest the false explanation was given only once, when I know it was given to at least three people. Zahawi’s lawyers confuse the words “capital contribution” and “startup capital” (they surely know the difference). They muddle Zahawi’s first explanation with his second. I think they know they have no real argument, and no serious libel claim. Which is why, instead, they have focused on silencing me – with bullying letters from the shadows. But I’m not going to play that game.

This is not the only false statement from Zahawi.  On 11 July he told Sky News he didn’t benefit from an offshore trust and wasn’t a beneficiary of it. In fact he was – in 2005 Zahawi absolutely received a gift from Balshore. This was a benefit and he was a beneficiary – in both everyday English and technical tax law. I have not called this a “lie” because Zahawi may just have been confused. But for him not to correct his past statement is unacceptable.

And Zahawi’s tax avoidance may have triggered a raft of further taxes: value added tax in 2000; trust taxation on gifts and capital gains in subsequent years; and withholding tax on his many interest payments to Gibraltar. I’ve asked Zahawi’s lawyers if he paid these taxes. Their response – he doesn’t want to get into a debate when he has an important job to do. But a large part of that job is being in charge of the tax system. And it’s not a debate, it’s a simple question: did the Chancellor fail to pay tax that was due? The public has a right to know.

Here’s the initial Twitter DM I received from Zahawi’s lawyers, Osborne Clarke. Note my reply that I won’t accept “without prejudice” letters (a “without prejudice letter” is often sent by lawyers negotiating a settlement; it can’t subsequently be put before a court, because that would dissuade people from trying to settle disputes). The opposite is an “open” letter. 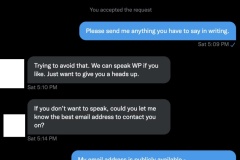 Their response was to send me a (supposedly) without prejudice letter – the very thing I’d said I wouldn’t accept: 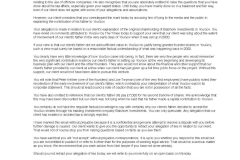 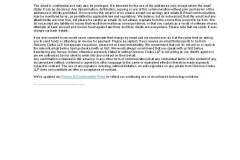 I responded as follows: 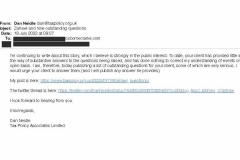 I then received this response: 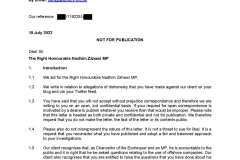 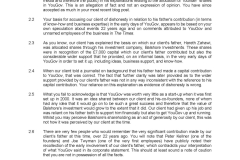 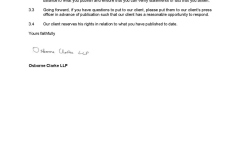 I hope it’s clear from the above why I believe publishing the letters is the right thing to do. I explain in more detail here why Osborne Clarke’s assertion that I can’t publish these letters is wrong in law.

I’m leaving comments on this post open for now, but will police them more than usual, for the predictable tedious legal reasons – sorry.